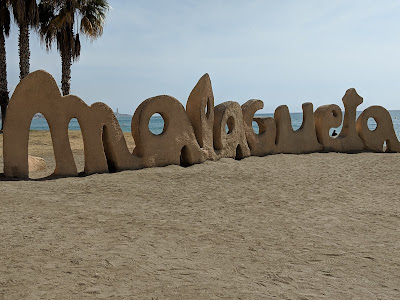 Being back home I find my brain taking me back to little moments on our recent trip. TGB's retirement tour 2019. The boy on a field trip with his class who held his hand out for a proper handshake, everyone walking by until I came across him and looked him in the eye, took his small hand and shook. He smiled, met my eyes and, nodded. His face glistened with little boy sweat, his cheeks rosy from the sun, his black hair slightly disheveled on purpose.

The busker in Marseilles with his dog who would sing along. God, we loved that fucking dog.

The food. Jesus fuck, the food. The Ibiza chorizo, the Venetian tiramisu, the cheese. So. Much. Cheese.

But mostly, I spend a lot of time thinking about a girl I saw on the beach that day in Spain.

On the boat portion of the trip we had a habit of getting off at most ports, wandering, parking ourselves at a sidewalk cafe and just being. We spent a lot of days in different ports of Spain. On this particular day we were in Malaga. We walked a mile or two to get away from the boat crowd and found ourselves in a little cafe. Alone.

I don't remember our breakfast. I do remember coffee, always coffee. I remember a handsome young server in a blue shirt.

And I will never forget a little girl.

As we sat facing the Alboran Sea, she came into view from the west, ever so slowly. Her father walked with her, his hands behind his back in that very European sort of way. He talked and she seemed not to listen. Her purpose, not clear to me at first, seemed to occupy the whole of her. In her right hand, attached to her forearm up to her elbow, was a crutch. As she turned ever so slightly in my direction I could see that the right side of her face was covered in a bandage, in part, securing something attached to her nose. She had the beginnings of a growth of hair just starting to peak out of the top of her head.

She wore a big, red, puffy jacket that seemed to swallow the whole of her.

I was entranced. I watched as she stopped every so often... to catch her breath? Her father would lean down to check on her and each time she would wave him off.

Then I saw where she was going. The beach had an assortment of equipment for exercise and for fun. She was headed towards the zipline. It wasn't particularly tall, maybe ten feet off the ground from its base. It didn't go particularly far, maybe twenty yards.

As she approached, her father put his hand on her back and said something to which she simply nodded. He walked to the end of the zipline and retrieved the seat.

She approached the ramp and laid her crutch down. I couldn't look away, but grabbing my camera seemed grotesque to me. I felt I would be stealing something precious that wasn't mine.

So I watched as she tried to walk, then crawl up the ramp. Her father, slowly bringing the seat over to her. It took a minute or two where it would take anyone else but seconds to get to the top. In that minute or two I saw the kind of courage and determination that is unique to survivors of the worst in this life.

Whatever her affliction, it did not reach her soul. It did not defeat her.

When she got to the top she took some time to catch her breath, sit on the rope, adjust whatever it was that her red puffy jacket hid, and reassure her father that she was okay. When he seemed as sure as a father could be, he picked up her crutch then he walked back to the end from whence he came, and waited.

That little girl launched herself. Her expression never changed. There was no joyous shouts, no giggles, no big smiles. She got to her father, got off the seat, took her crutch and, walked back to the other side and did it again.

Same slow crawl up, same adjustments, same deep breaths. And she was off once again.

Twice she rode the zipline. Then it was time to go. This time her father's hand was on her shoulder. Just in case.

Maybe she did it because fuck you, I'm still a kid and you are not taking that from me. Or maybe she just likes ziplines.

But I know that I have been scared since then. And I know that I think about that kid's courage and I realize how lucky I am and, maybe, how silly I am being. Not that my fears are frivolous, just that, maybe I can be as brave as a little girl in a red puffy jacket.

I should at least try.