Let the hate flow through you 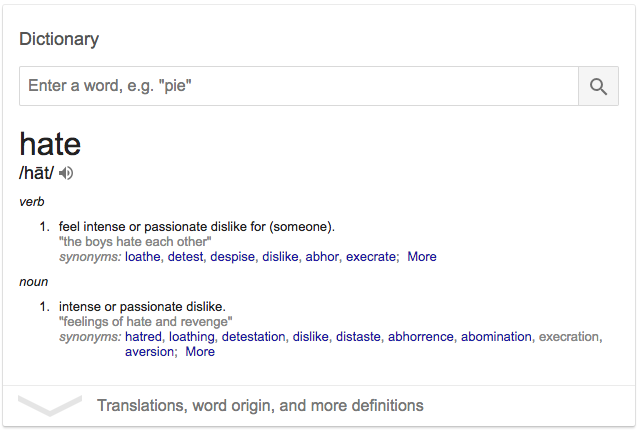 Hate gets a bad rap.

Hating people who believe people who look or love different are somehow less than is not only fun but, the right fucking thing to do.

Hating policy makers that advocate separating children from their parents simply because they travel here the wrong way, looking for a better life, is more than okay.

This idea that hate is always bad, that it leads to the dark side is misguided and silly.

If you think Americans didn't hate taxation without representation, you might be a wee bit stupid.

If you think slaves didn't hate slave masters and being slaves or, black people didn't hate separate but equal you might be a special kind of stupid.

Hate is just a word. It is neither good nor bad, it simply is... until you put it to use.

45 hates anyone who does not fall at his feet. He hates people he can't understand. He hates those he considers less than. He uses hate to work up his base and they eat it up and love (irony alert) him for it. He uses that hate to advocate policies that would turn so many human beings into other and less than then pointing and blaming those same others for all that is wrong and his supporters eat that shit up.

I hate policies that seek to exclude the marginalized and weakest among us. I hate the people who jump through mental hoops to justify those policies.