It's strange to me that more people were upset by a fucking meme than an actual mass shooting. Not surprising but, strange. 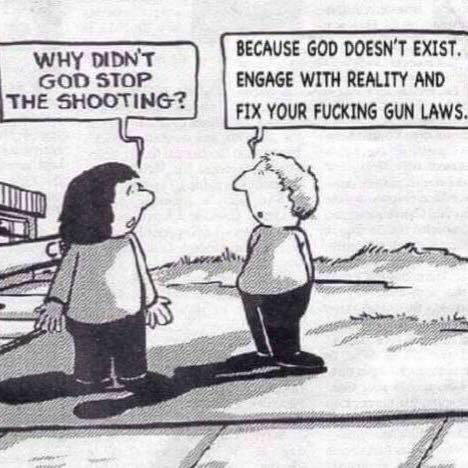 Here's my question to the people who felt the need to defend their god because of the above meme: did you do more than pray for the families that have been beset by the tragedy of losing a child after the latest school mass shooting? Did you actively engage your legislators - write them, call their office, tweet at them that you demand they do something, anything other than the usual, empty platitudes of thoughts and prayers?

My guess is that none of the people who were complaining, who messaged me that I am being hateful, actually have poured as much passion into contacting their government to demand reasonable gun legislation that could potentially save even just one life as they have into posting their grievances about my treatment of their god.

Anyway, to me, that meme is about the fucking futility of thoughts and prayers after another (in what is sure to be a line of many more to come) mass shooting in this country.

Thoughts and prayers are as futile as wishing upon a star.